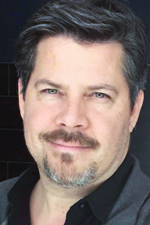 As owner of Saturn Creative, James has a unique prospective on what it takes to run a creative agency, and why a virtual company has its distinct advantages. He owned his own small design company for seven years, but after much “feast and famine”, he sought out a more stable corporate environment. James became a Senior Graphic Designer and then the Art Director for the Addy award-winning Weiser Creative Group in Westlake Village, CA.

He and the team at Weiser created amazing brand identities, websites, print ads, the works. They executed strategic creative campaigns for national brands and highly recognized businesses such as Amgen, BP Solar, The California Endowment, Dole, DTS, Four Seasons, and the Ronald Reagan Library. The company was sold in 2010.

That same year, Saturn Creative was launched. The many relationships James forged with content creators, marketers, designers, programmers, writers, and video professionals allowed him to open the doors to a business without a literal roof. The company’s unique paradigm is based on low overhead and a large talent-base, giving it staying power even in a difficult economy.

James had a previous life as a professional actor, having enjoyed guest star and recurring roles on TV shows like THE KING OF QUEENS and THE DREW CAREY SHOW. He still keeps busy directing theatre locally.